Lately I have been baking things in pans. Last night for dinner I made lasagna. We had a leftover meat lasagna that Annie and Anna made last session, which was good news for me because it meant I just had to make a vegetarian lasagna. Not dealing with mass quantities of meat makes me happy.

First I went to Vini’s garden to get some summer squash. Did you know that summer squash has prickly hairs on it? Because it does. I also got some basil because it was readily available, and I couldn’t help myself.

Then I heated up some of the tomato sauce that Maia made second session for pasta. It was in a frozen block, which made it fun to defrost. First I put the whole tupperware in a pot of hot water, then I put the sauce block into a sauce pot on the stove. Look how silly that looks!

I mixed some frozen spinach (which also went into the pot of hot water! Nothing defrosts in our fridge, it is super cold) with ricotta cheese. We have tons of frozen spinach, so I put more of that in with the summer squash along with an onion. Maddy and I also chopped tons of mushrooms, because — funny story! — I thought I was ordering a basket of mushrooms and ended up with a humongous box of them. 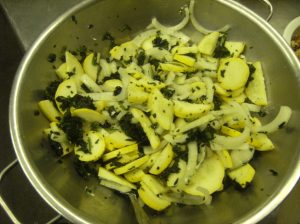 The final product (after baking for about 40 minutes) came out looking delightful, in my opinion.

We ended up having that entire small lasagna left over, which made me think that two pans of food would be enough to feed this staff. But apparently that was not the case, at least not when peach crisp is involved.

I can’t necessarily give an exact recipe for crisp, but I can give you the advice given to me by my dad. First, chop some peaches into strips and deposit them into a pan. Then pour melted butter and maple syrup on them. Then, for the topping, mix the following together: 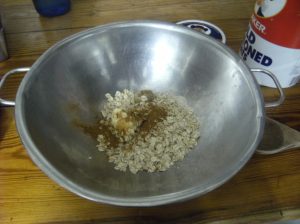 This is the topping for the crisp I made for myself (previous to mixing, of course). For mine, I used whole wheat flour, because I find it more delicious, and earth balance instead of butter. I also included some walnuts because we happen to have lots of those. Then when we ran out of actual crisp I started offering people my whole-wheat, vegan, reduced sugar version, which made me seem like a caricature of a health enthusiast, but I didn’t mind. I baked them for about half an hour. Look how delicious this is: 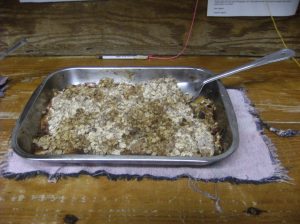 I love peaches, and oats, and brown sugar, and summer. I’m about to make myself some vegan pesto with yet more walnuts … I’m going to be set on those omega-3s.