Vegetables from the oven

The theme of this week was basically putting vegetables in the oven. I will actually be doing even more of that tonight, but that will have to wait until next week.

Last Sunday for dinner I made some pasta inspired by this post from Smitten Kitchen. Isn’t that beautiful? Here’s mine: 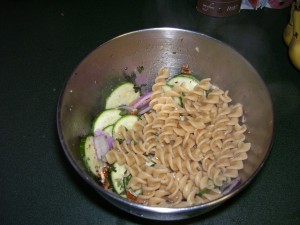 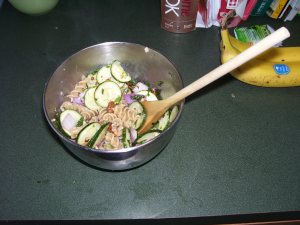 I used pecans instead of walnuts because I happened to have some. My one complaint about this pasta was that the onions were really strong, so I’m dialing it back in the recipe I am giving you. The title of the pasta, by the way, is pretty much the way I title things in my weekly meal plans … I list out the main ingredients I plan to use.

1. Boil water and cook the pasta.
2. Combine juice from the lemon, the olive oil, and the garlic, minced. Whisk these together, and while the pasta is cooking, slice the zucchinis and the onion and put them in this dressing.
3. Stir together the drained pasta, the vegetables in the dressing, the pecans, and the basil.

Simple and delicious! I also made a noodle dish with bok choy and soba noodles. 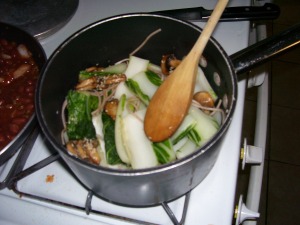 Sesame oil is one of the greatest substances on earth. I also love the sweetness of bok choy, and the texture that sesame seeds add, and the hearty texture of soba noodles. This was a great success.

Then I made a really boring but seriously delicious lentil dish that was just lentils, vegetables (broccoli, carrots, and onion), and spices (most notably ginger). Last time I made this, I made it with zucchini and red onion, which I think I may have preferred. This was still a success, though. 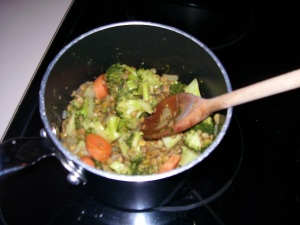 Moving on to the baking vegetables in the oven portion of this post, on Wednesday I made Ratatouille, sort of from Vegetarian Bistro, but a lazier version because instead of sauteing the vegetables first, I just put them in the oven for a little bit longer. It was delicious — eggplant is a marvelous thing! — but the onions were too crunchy. They could have used the saute. 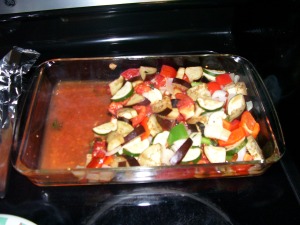 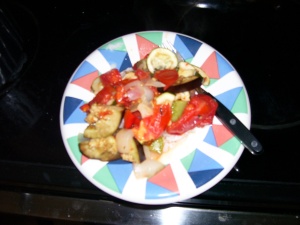 I ate it over white rice. Sidenote, I’m not ashamed to admit it, I struggle making rice. I don’t think I’ve ever opened the pot of rice and been entirely pleased at the fluffiness or texture. It might be because I usually cook a smaller amount of rice than the directions tell me how to make, or because my pot does not seal properly, but it never comes out perfectly.

Finally, in a continuation of the theme, last night I made a tomato potato onion gratin, which I found a recipe for here. It didn’t end up as cute as the one in that post’s picture, but it was really delicious. It’s only 8:30AM and already I can’t wait to have the leftovers for lunch! 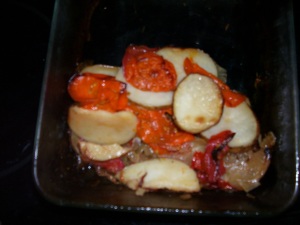 If you followed the link, you may notice that the recipe calls for cream. I had every intention of replacing it with soy milk, but then I left my soy milk in my Dad’s refrigerator, so that did not happen. I’m still using up a carton of sweetened soy milk, though, so it may have ended up weird. I guess we’ll never know. I ate this with chick peas (not pictured) for some protein. Now I have the rest of the can of chick peas, so perhaps hummus is in our future.

Have a great week!